Normally, every five or six years our elected representatives in D.C. put aside their political differences to reauthorize the nation’s transportation program — including the fuel tax, for construction of roads, bridges, transit and bike and pedestrian infrastructure, and safety programs.

This is because our economy relies on transportation, and bridges and highways are not Republican or Democrat.  Everybody needs them.

The process has broken down

On March 30, Congress managed to avoid a shutdown of the nation’s transportation system by passing an eleventh hour extension of the current SAFETEA-LU legislation. This means  that thousands of highway and infrastructure projects, here and across the nation, won’t stall out this construction season.  Until June 30th, anyway.

Funding our transportation infrastructure via nine “temporary” extensions – one stopgap measure after another, since the original SAFETEA-LU expired in September 2009- is not the way to move forward.  The process has broken down.

The reason is simple: money

The major problem is the growing inadequacy of the federal gas tax, which hasn’t been raised since 1993.  Not only are we attempting to build 21st-century infrastructure with 20th-century dollars, but also, as cars become more efficient, people need less fuel and pay less into the Highway Trust Fund.

With Congress bitterly divided, lawmakers can’t agree on where the additional funding should come from, although a number of ideas are being floated.

For the past several months, the House attempted to gain enough support to pass a 5-year, $260 billion bill (the American Energy and Infrastructure Jobs Act) that has new revenue incorporated into it via leasing and production fees from new oil-drilling rights on federal lands and coastal waters.  This funding mechanism, although favored by nearly two-thirds of Americans (according to a poll by the United Technologies/National Journal Congressional Connection), failed to gain bipartisan support.

Another provision of the bill, which would have terminated guaranteed funding for public transit, failed to gain even Republican support in the House and as a result, the bill was doomed from the start.

The Senate alternative (MAP-21), a two-year program with a price tag of $109 billion — had bipartisan support but was not taken up by the House and is unlikely to move forward even though the clock is again ticking.

And before asking taxpayers to pay more for roads, rail, bridges, and infrastructure, we must ensure existing funds are not wasted. Both bills include significant reforms to control federal highway spending.

Both of the Senate and House bills include provisions to make the project delivery process more efficient and both consolidate existing transportation programs by nearly two-thirds.

And many lawmakers rightly argue that states should be given more flexibility in how they can find creative ways to use federal dollars. Congress should give more encouragement to innovative approaches, including public-private partnerships that leverage private investment with public dollars.

In the current political climate, no one in Washington is going to suggest an increase in the gas tax. Yet more revenue from that source – or from a mileage-based user fee – is an essential part of a solution.

Every transportation policymaker understands the potential long-term solutions to these near-term problems, but few are willing to push them forward because they involve difficult choices about how to raise more money for federal transportation programs.

“We’ve just been caught up partially in election-year politics and partially in this whole battle that seems to trump and override our issue, which is the budget battle,” said Pete Ruane, president and CEO of the American Road & Transportation Builders Association. “That’s going to be part of this debate every single time until they finally make some tough decisions about how to fund these programs.”

Congress has now bought itself until just before the July 4 recess to come up with a final agreement on a transportation bill — or enact another extension.

Hopefully, over the next 90 days Congress will work something out and maybe by the end of the year we’ll have a long-term bill.  But it’s also likely the issue won’t be settled until after the general election in November.

Everyone agrees on the broader goals of transportation policy and spending, which are economic growth and personal mobility. A long-term solution needs to be developed in a bipartisan fashion — and spearheaded by the administration — regardless of who is in power. 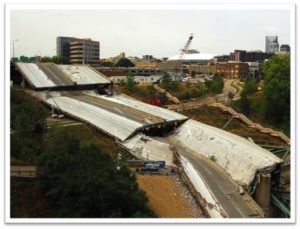 Are you hearing (or perhaps voicing) complaints about delays on area roadways, road construction or the high price of gas?

Statements like “with the price of gas so high they should lower the gas tax”?

Of course, throw in the usual “all the roads in this area are in terrible shape.”

It seems that we, the traveling public, want to have it all: safe bridges, smooth roads, no construction delays—all at less cost.

The problem is, it takes time to reconstruct and maintain our infrastructure and it costs a lot of money to do so.

And the backlog of needed projects is growing.

Right here in Duluth, where the I-35 reconstruction project will cost a total of $81 million over two-plus years, the “can of worms” interchange, which contains 31 individual bridges, will also need repair and restoration to the tune of an estimated $250 million.  This will become a critical infrastructure need within the next 10 to 20 years–with no funding source yet identified.

Do (Lots) More with (Lots) Less

Today we are asking our road authorities (at the city, county and state) to do more with significantly fewer resources.

You may have heard by now of a recent survey by the Rockefeller Foundation, which found that two-thirds of the American public felt that a greater investment is needed in transportation infrastructure. Fully 80 percent of those surveyed agreed that spending on highways and bridges would produce jobs and economic growth, yet only 38 percent thought that federal spending should be increased and only 27 percent said that federal gas taxes should be raised to support this spending.

If not addressed, many types of costs will be pushed out into the future.

What will our future generations say about this practice?  How happy would we have been if previous generations had done this to us?

According to MinnesotaGasPrices.com, the average statewide price this week is $3.85 per gallon and rising.

But how much of the price at the pump is due to federal taxes?  It may be less than you think.

The United States federal excise tax on gasoline is 18.4 cents per gallon (24.4 cents for diesel fuel)—and has remained the same since 1993.  Since it’s a flat rate (not a percentage of the price, like a sales tax), tax revenues do not rise even if gas prices do.

This means the buying power of these revenues is significantly less that it was18 years ago.  That’s like you never seeing an increase in your paycheck to match inflation…since 1993.

Estimates by the Wisconsin Transportation Development Association suggest that the federal government would need to increase the tax to at least 28 cents per gallon just to recapture the purchasing power lost to inflation since 1993.

In this era of “no new taxes” and calls for streamlining government, I know that the topic of the gas tax is a controversial one.  But as a deadline looms for the reauthorization of the federal surface transportation program, it’s no wonder that funding is such a stumbling block.

Is raising the gas tax worth it to you?

A large majority of Americans think spending on transportation infrastructure is important, according to a recent national poll.

It’s interesting to note, however, that the majority also opposes paying more of their own money to improve or modernize our transportation systems.

I can certainly sympathize with these respondents, who are feeling the pinch of a tight economy and reacting accordingly.  I know gas prices at $4.00 inspire a lot of anxiety in plenty of people, myself included.

However, my recent trip to the Transportation Development Association conference in Madison highlighted the issue of the federal gas tax that helps to build, repair and maintain a first-rate nationwide transportation infrastructure.

The gas tax is currently a flat rate of 18.4 cents per gallon – the same as it’s been since 1993. Unfortunately, prices of asphalt and other road-building materials haven’t held so steady, so the budget for keeping roads safe and efficient is approaching a breaking point.

TDA has pointed out that an increase in the federal gas tax by 10 cents per gallon would cost the average family $9 more a month.  Are faster, safer commutes and trips worth that much to you?

Or perhaps the better question is, for critical transportation infrastructure–where would you prefer the money come from?