We are building off responses from our Phase 1 Survey to dig deeper: What are your transportation-related priorities? What tradeoffs would you accept?  Your input is essential to better target our limited financial resources toward meeting our transportation needs, now and in the future.

Even if you didn’t participate in the Phase 1 survey, you can still take the Phase 2 survey!. It’s interesting, interactive and will take 5 minutes or less. It’s open through December 31.

Produced by SRF, AECOM and Bourne Transit Consulting, with assistance from the MIC. END_OF_DOCUMENT_TOKEN_TO_BE_REPLACED 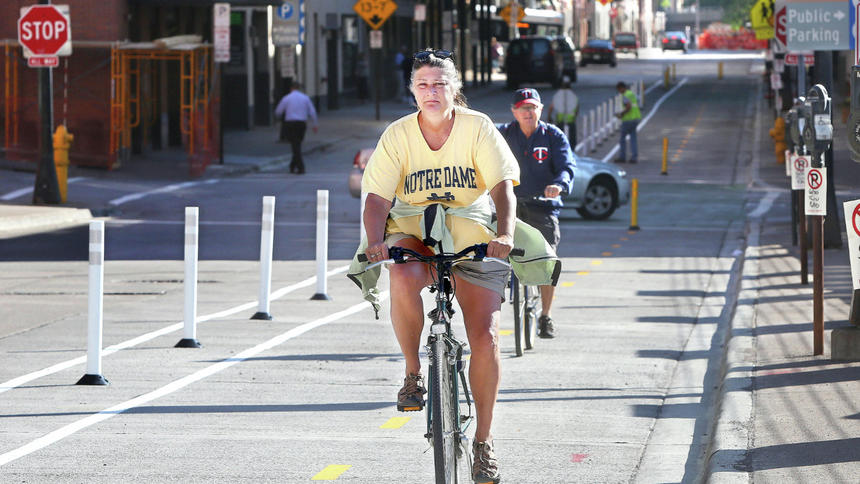 The trial run of the area’s first on-street protected bike lane is coming to an end this weekend, the Duluth-Superior Metropolitan Interstate Council reported this week.

James Gittemeier sees the future at a particular point on Woodland Avenue.”When we counted it, it’s eight hundred to a thousand people a day are walking on that trail going to destinations,” said Gittemeier, principal planner for the Duluth-Superior Metropolitan Interstate Council.He was talking about the pedestrian foot path from the campus of the University of Minnesota Duluth to the BlueStone housing and retail development. A well-marked crosswalk, controlled by traffic signals, bridges heavily traveled Woodland Avenue to connect the two where a drive enters the shopping area.To be successful, the BlueStone development needed more than the traffic on Woodland Avenue, Gittemeier said; it needed the UMD population. That happened, but not in the conventional way.”In the old paradigm they would have said we absolutely need a road going to UMD because we need people to drive from those apartments and those businesses into UMD and back,” he said. “(Instead), the design is about people biking and walking between those two.”