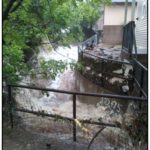 Last Tuesday night we presented information and took questions at a public meeting about our Central Entrance Transportation Plan.  It was raining hard when the meeting wrapped up around 7 pm.

And it kept raining hard all night long.

By Wednesday morning, the City of Duluth had declared a state of emergency, due to the torrential downpour that caused widespread flooding and heavy damage to infrastructure.  The cities of Superior, Hermantown and Proctor, all within the MIC’s planning area, followed suit shortly thereafter.

We received some good comments and questions at the Central Entrance meeting, which we had planned to address in this week’s blog. 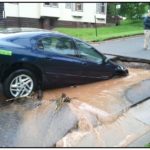 But the transportation issues and priorities for this community have dramatically changed – literally overnight.

All of the area’s jurisdictions are currently in assessment mode and the extent of the damage is still being tallied.  While the concerns expressed at the meeting, about traffic calming, walkability and access management, are all still valid—right now public safety and damage control initiatives take precedence.

The MIC has conducted numerous planning efforts up to this point, which may or may not be relevant to the damaged infrastructure.

We will be revisiting the recommendations from many of our past plans and studies to prepare for the coordinated work of rebuilding our transportation system for the enhancement of our communities.

As cities across the U.S. are battling it out for the distinction of “Most Bike-Friendly,” does Duluth stand a chance of being included some day in the Top-50 list?

You might think that our long winters and steep hills would prevent this. But think again: two of the top-ranked cities, Portland, Oregon (back to #1 this year) and Minneapolis (dropped to #2) are neither sunny nor warm places for much of the year-Portland is rainy , cool and hilly and we know all about the cold and snowy winters of Minnesota.

Consider also that two other cities – Boulder, Colorado (#3), which is comparable to Duluth in its total population and San Francisco, California (#8) – feature many or more of the same topographical obstacles we face here.

So what does it take to get on this list?

In addition to having a significant interest in cycling on the part of its residents, a city needs to be willing to be proactive and try new things.

In some ways Duluth has operated this way, to promote bicycling as a transportation option. For example,

These are highly visible bike-friendly amenities.  However, what is missing is just as noticeable:

But we also have some opportunities in our near future for the Twin Ports community to be proactive in a couple of upcoming projects:

So, what do you think? What’s your experience with biking in Duluth? Do we have the commitment that’s necessary to bring our city up to the level of one of America’s most bike-friendly cities? What do you see as opportunities—or opportunities lost—for improving biking here?

Steep hills and long cold winters are a fact of life here in Duluth, MN – and pose a significant barrier to commuting by bike in this town.

But there’s also the Lakewalk and its planned extension across the length of the City, providing a safe and scenic off-street route; signed onstreet bike routes; a few miles of dedicated bike lanes; and ways to make it up that hill.

Not to mention, it’s summer.  The cyclists are out in force and several of them stopped by our Lake Avenue bike station on Bike to Work day a couple of weeks ago.

As you’ll see from our video interviews, they come from every part of the city, feel that the advantages of biking far outweigh the disadvantages, and generally find biking to work a very viable option.

Check it out – and perhaps be persuaded that any day can be Bike to Work day.